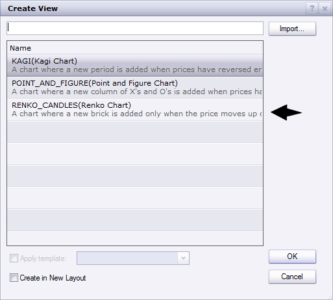 Marketscope is the standard charting application from FXCM and is an add on to the Trading station platform. The Markscope charting platform is relatively easy to install and use and doesn’t require much of a learning curve if you have been around the markets for a while. For those struggling to find a good Renko charting software, FXCM’s Marketscope does a fairly good job to plug this need.

Using Marketscope for the first time, it didn’t take too long to figure out the Renko charts and deploying them was fairly quick without any additional load on the computer. Overall, my impressions of using the Marketscope charting platform is that it makes for a good stand alone charting application that can be used even by Demo account holders.

In order to build up the Renko charts in Marketscope, traders need to click on the ‘+’ icon tab next to the charts and select ‘Create View’. Alternatively, this can also be accessed by clicking on File>Create View which opens a pop up window. Here, traders can see three customized charts, Kagi, PnF and Renko.

Select the ‘RENKO_CANDLES (Renko Chart) option, which opens a new window called ‘Renko Chart Properties’. Here you can input the trading instrument or symbol of your choice and select the time period and the Renko brick size. There is an additional option to select the ‘from’ range as well in order to build up a good history of Renko charts.

Once you click on ‘Ok’ it takes a while for the Renko candles to be generated in a new tab. The chart below shows the GBPUSD 50 Pip Renko chart.

Trading can be done directly from the Renko charts and Marketscope allows for adding indicators and drawing tools directly on the Renko charts itself. There are no further additional charts required making it very easy to use and manage. To build additional custom brick size Renko charts for the same currency pair, you will have to follow the same procedure as above but just change the Brick size in the configuration box.

In conclusion, the Renko charts from Marketscope ranges above average largely due to the relative ease to build Renko charts on the fly. Besides the missing factors mentioned above, the nice-to-have features, the fact that Marketscope is confined to FXCM means that it limits traders to trading only with FXCM. All said and done, for traders who want to practice trading with Renko charts, Marketscope is just perfect.