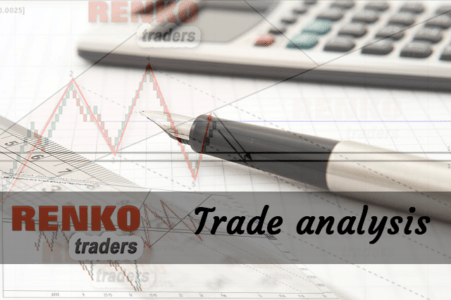 Sometimes, the best trading systems are the ones which are the most simplest. Some of you who have been following Renkotraders.com on social media such as Facebook, Twitter or the Google+ community would have noticed a few trade suggestions made every now and then. In this case study for GBPUSD, you will read about how to trade Renko charts using one of the simple renko trading strategies.

About two weeks ago, a trade call was issued for GBPUSD 25 Pip Renko chart. In this trade call, a short position was recommended when GBPUSD was trading at 1.2498 and we expected to see price fall towards 1.2400, about 98 pips. This was on February 8th 2017.

Nearly a week later, on February 15, GBPUSD fell to 1.2400 hitting the target level and quite quickly bounced off the 1.2400 support level. In this article we take a look at a very simple Renko system that makes use of just Renko charts and some chart patterns. You will also learn a bit in details about the broadening wedge pattern that was in use in this simple trading system and how you too can utilize this method in trading Renko charts.

The picture below shows a typical graphical representation of a broadening wedge pattern.

The key characteristics of the broadening wedge pattern is to look for the consecutive peaks and troughs to be expanding in nature such that when you connect the highs and lows with a trend line, they should be diverging (moving in opposite directions or away from each other).

In a broadening wedge, wait for price to break the trend line to the downside. Typically you can expect a retest back to this level in most of the cases this is depicted by the dotted arrows on the above illustration for a broadening wedge pattern.

Once price retests the lower trend line, you can then go short targeting the initial starting point, which is 0 (this is depicted by the green horizontal line on the above picture).

Now that we have the basic introduction of the broadening wedge pattern, let’s look at the GBPUSD trade.

How to trade GBPUSD Renko chart

The first chart below shows the basic set up of the GBPUSD Renko chart where you can see the broadening wedge pattern taking shape.

Here, you can see that price action was in a steady uptrend, rising from around 1.2000 and posting a steady gain all the way up to 1.2700. The subsequent highs and lows that were formed, resulted in the formation of a broadening wedge pattern, which suggested that GBPUSD could be posting a correction any time soon.

After identifying the broadening wedge pattern, a short position was taken near 1.2498 which marked the retest of the lower trend line from the broadening wedge pattern. Here, the target towards 1.2400 was selected because it was the nearest price level and looking back the price action you can see how GBPUSD initially hit resistance at this level before breaking out higher.

The above chart shows how price interacted. There was a small push higher until price tested the lower trend line firmly, following which there was a strong decline lower as GBPUSD eventually hit the target of 1.2400, nearly a week later.