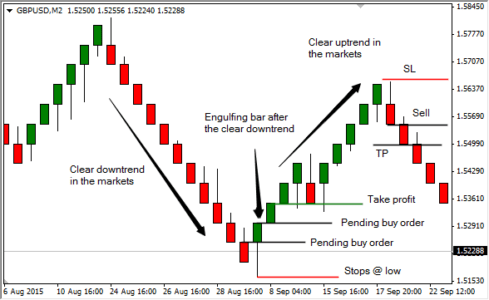 The Renko Engulfing Bars strategy is merely an adaptation of the original Median Renko charts engulfing bar strategy and works on the same principles as originally outlines. The premise for this strategy comes out of the discussions on the previous thread where a reader, Mike Humble pointed out if the strategy could be used to the regular Renko chart as well.

In order to use the Renko engulfing bars strategy with the regular Renko charts, traders need to firstly enable the ‘wicks‘ of the Renko bars. This can be done with most of the freely available Renko indicators, but for the purpose of this article and to ensure uniformity, the Renko EA we make use of can be downloaded for free at the end of this article.

Renko Engulfing Bars – What are they and how are they formed

The Renko engulfing bars can be visually seen on the charts when the ‘wicks’ are enabled on the Renko EA settings. The wicks merely represent the high/low price or price rejection in its truest form. Meaning that, prices tested a certain high or a low but failed to close at that point, thus leaving a wick. The chart below gives a comparison between regular Renko charts and the Renko charts with wicks enabled. The image should be self explanatory for the readers.

From the above chart, notice the pivot points marked 1, 2, 3, 4 and it is now easy to identify that these turning points in the markets offered a better opportunity to trade when using renko charts with wicks than trading with the regular renko charts (without wicks).

The Renko engulfing bars follows the same rules and are outlined below.

The chart below illustrates a buy and a sell signal triggered based on the engulfing bars strategy.

Click on the image above to read the notes on the chart.

Renko Engulfing Bars – Not all engulfing bars are equal

The above strategy should however be applied with caution. Engulfing Renko bars are the strongest after a clear trend is established. However, they lose their probability when they are formed mid-way. Another factor to bear in mind is to trade only the clear engulfing signals. For example, in the above chart, notice the bearish engulfing Renko bar that was formed mid way? If you look closely, it is not an engulfing bar as the low of the previous bullish Renko bar was greater than the low of the bearish Renko bar.

Renko Engulfing Bars can be applied to any method

This is not a trend following strategy. The Renko engulfing bars strategy offers you a fixed stop loss and take profit levels with more often than not, the risk/reward being less than 1:1 under normal trade set ups, while some are on average 1:2 risk/reward. However, when applied correctly to the markets, the win rate is definitely higher.

By using good money management methods, traders could potentially expand this simple fixed risk/reward system into a trend following method. The Renko engulfing bar strategy can also be used alongside any trading system and works beautifully with support/resistance levels, trend lines and so on.